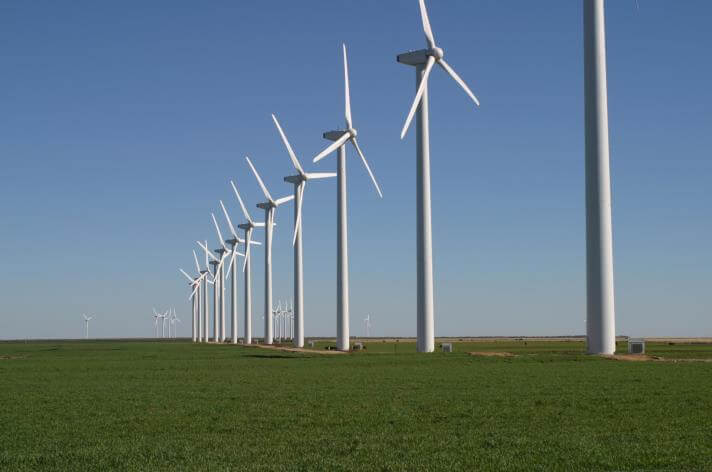 The first and largest utility scale wind power plant in Jordan and the Middle East, The Tafila Wind Farm, was inaugurated on Thursday under the patronage of His Majesty King Abdullah II.

The project is in line with a royal vision to diversify energy sources and promote greater reliance on renewable energy. The Tafila Wind Farm was developed in response to the 2010 renewable energy law, calling for around 10% of electricity to come from renewable sources by 2020. Jordan imports around 96% of its energy needs at a cost equivalent to 20% of the country’s GDP.

His Majesty King Abdullah II announced the official launch of the wind farm before taking a tour of the plant, which is owned and managed by the Jordan Wind Project Company. At JD85 per megawatt-hour, the wind turbines will produce electricity at less than half the cost of generation for conventional power sources .The project will save the government around $50 million every year, and will supply approximately 3.5 percent of the country’s annual electricity consumption.

In his speech at the event, Chairman of the Jordan Wind Project Company, Samer Judeh, said the wind farm’s 38 massive turbines draped with the proud Jordanian flag would not be here had it not been for His Majesty King Abdullah’s vision and great leadership. Judeh added that His Majesty “spares no effort locally and internationally to promote investment in Jordan. This oasis of stability in an otherwise very rough neighborhood.”

Judeh also added; “The Tafila Wind Farm will contribute towards achieving energy security. The project is a quantum leap not only for Jordan but the Arab world as a whole, as it is the first to implement an effective solution for Jordan’s energy challenges through a partnership between the public and private sectors. We believe the project will stimulate the investment climate for similar renewable energy projects in Jordan to take place and will make Jordan a new and important destination for renewable energy investments in the region.”

Minister of Energy and Mineral Resources, Dr. Ibrahim Saif, said that Jordan has been emphasizing the importance of renewable energy sources in recent years. The government is implementing a number of studies and programs that improve and develop the use of alternative energy sources, in addition to efforts to create an attractive investment climate in the field of renewable energy. The minister stated that the project will produce energy from carbon free resources, displacing 235,000 tons of carbon dioxide emissions annually.

“InfraMed Infrastructure Fund is proud to have contributed to the first utility-scale wind farm in the Near-East. Our fund’s involvement in this successful public-private partnership demonstrates European and North-African investors’ resolution towards Jordan’s economic development and stability, as much as renewable energies,” Frederic Ottavy, CEO of InfraMed Infrastructure Fund, said.

The project’s foundation stone was laid by JWPC in April 2014 while the construction was completed in August this year. 38 VESTAS V112 wind turbines were installed, where each turbines is 150 meters high including its blades. Tafila was chosen due to its steady, unobstructed wind flow, speed and direction.

Commenting on the launch Dr Sultan Ahmed Al Jaber, UAE Minister of State and Chairman of Masdar said; “The Tafila Wind Farm is a concrete example of how multi-stakeholder partnerships, coupled with the right policies, can solve critical challenges and expand access to new forms of clean and affordable energy across our region. Renewable energy contributes to achieving sustainable economic and social development, while also playing a pivotal role in reducing the impacts of climate change. Al Tafila Wind Farm will serve as the foundation from which we will explore future energy partnerships in Jordan.”

Chairman of EP Global Energy, Efthyvoulos Paraskevaides, said: “EP Global Energy is proud to have led the development of this pioneering and transformational project in Jordan and at the same time to have contributed to a greener planet.”

The International Finance Corporation, and the European Investment Bank arranged the financing of the project, while participants in the lender syndicate included the Dutch Development Bank, Europe Arab Bank, and OPEC Fund for International Development, with the Export Credit Agency of Denmark providing a guarantee for a portion of the loans.